Ken Hunt began his legal career at Hall Estill and serves as a Senior member on the firm’s Board of Directors. His practice focuses primarily in the areas of federal, state and local taxation, including deferred compensation arrangements and tax-related litigation.  He also assists clients in many energy related business transactions especially acquisitions, mergers and divestitures.  He has been involved with ERISA issues both for clients and the firm, where he serves on our deferred compensation committee. Ken is an AV-rated attorney through Martindale-Hubbell, a Best Lawyer in America in Tax Law and Litigation & Controversy-Tax, as well as being recognized as an Oklahoma Super Lawyer in Tax Law.   He has also been named as Tulsa Best Lawyers Tax Lawyer of the Year for 2011, 2012, 2013 and 2014.

Ken has lectured for Oklahoma City University Law School, Oklahoma Bar Association, Oklahoma Society of Certified Public Accountants and the Mid-Continent Oil and Gas and OIPA Associations, and before various groups on taxation issues.  He has published more than 500 articles as the Oklahoma correspondent for the national publication, State Tax Notes.  He is the author of the “Oklahoma Tax Law” section in the State Tax Handbook, published in 2001 by Brubaeken Publishing.  He is also the author of the Oklahoma section of the American Bar Association’s Tax Section  project on the taxation of S corporations.  He also served as an adjunct professor at the University of Tulsa School of Law.

Additional highlights of Ken's career include: 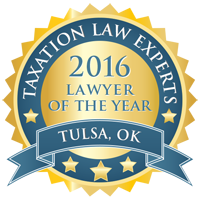